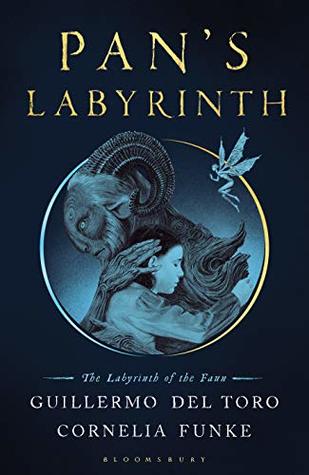 Synopsis
Ofelia has been sent to stay with her new stepfather, a ruthless captain of the Spanish army. For him, the dark and eerie forest in which they live is a cage, serving only to hide resistance fighters in the drawn-out and bloody civil war – those he has made it his aim to destroy.

But with her mother bedridden, Ofelia is left unchecked and becomes enchanted by their magical home. Obsessed with fairytales, she is drawn deeper and deeper into a mythical world which is both cruel and kind, benign and deadly. For Ofelia, too, must endure violence if she is to complete the tasks that will win her place at the centre of the labyrinth: the palace of the Faun…

I really tried very hard to not compare this to the (near flawless) film. It would appear, though, that it’s gonna take a stronger folk than me to achieve such a task.

I pre-ordered this when it first became available, and then it sat on my kindle for nearly 2 years because I was concerned. You see, Pan’s Labyrinth, the film, is probably my all time favourite film. I love it so much. I was worried this novelisation would not live up to my almost unreachable expectations. BUT IT EXCEEDED THEM!

Not only does the film remain in my fav films list, this just made my fav novels list. I love this story with all my heart. The plot in this novelisation follows exactly that of the film, but we get a much deeper level of exploration of thoughts, motivations, moods, etc, that films rarely manage to capture (even the best ones). This made the characters come to life so much more. In addition, this novel also explores the backstory of the frog, the pale man, and the faun, and really did a good job of pulling them all together, and combined their stories into Ofelia’s superbly; something which the film doesn’t do, but ups the quality of the overall story considerably. I think I prefer this story told through literature rather than film (which is not always the case for me). It gripped me from the first page and I couldn’t put it down. I read this in just 2 sittings.

Overall, I bloody loved this, I did. A faultless melding of fairy tales, historical fiction, and action, telling a heart-breaking and bittersweet story of loss, grief, trauma, the desire to belong, and most importantly, the need for escapism in a world filled with the horrors and cruelty of mankind. Perfect.

Anyway, I’m off to draw chalk doors on my walls. Until next time, peace and love!

Jack CJ Stark is a storyteller. View all posts by ItsCJStark